Finally! I’m getting to my Hershey Half recap.

This was a rough race. It was pretty cold (40ish or less than at the wake up). It is also quite a hilly course.

DH came down later and brought our dog to cheer me on. Wow — the puppers decided to be “Super Bad” and try to chase EVERY single car on the roads. DH was exhausted by the time I finished. And, once again, about two hours after the race it was difficult to tell if it was me or puppers who ran.

(Not from that day, but what he looked like)

So onto the race…

I am pretty proud of my time at the halfway mark lately. I seem to be increasing my speed and feeling really good by the 10k split or halfway point.

I was actually doing pretty well until around mile 8 when things started to fall apart. At mile 8 you do a small hill climb then run around the Milton Hershey School. It’s really awesome because the kids from the house families all come out and are cheering the runners on — lots of pushing you forward! What’s not so great is the wide open space on a cold and windy day. It just wipes you out — especially if you haven’t learned your less from your 4 other half marathons and haven’t trained like you should. (Stupid Hannah problems)

All-in-all I finished with a PR …although not as awesome as one I wanted/hoped for.

My brother had his camera out along the course and took some photos (my sister-in-law was also running). 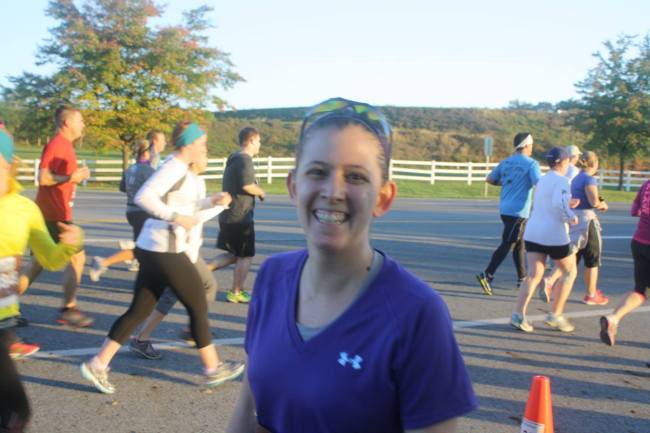 My hip was really tight and was bothering me quite a bit by around mile 11. I sort of limped my way through the end. I love that I ran the last bit with a man who had on a Philadelphia Marathon shirt (2012, the 2013 being my next race). Around 11.9 I stopped to stretch my hip at a sign post and he said “come on, don’t give up now, we’re almost there.” I absolutely love the camaraderie at running events! It gives you renewed hope in the human race.

Anyways, I finished and then fell asleep.

As a half marathon runner you receive two tickets to HersheyPark in theDark. DH and I visited on Nov 1 and had such a good time. We mainly hit up the roller coasters (and realized how old we are getting!). Then headed off to Troeg’s brewery in Hershey for some dinner before getting back home to puppers. THAT was a great day.